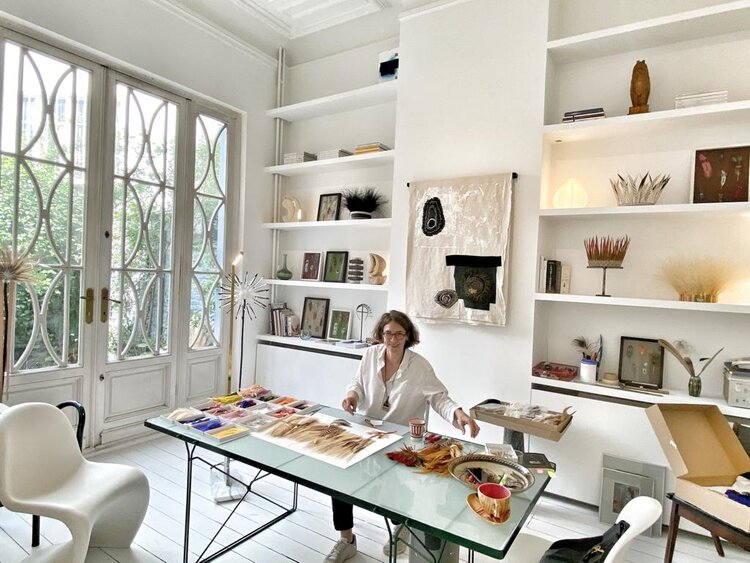 Inge Grognard’s career as a make-up artist started in the mid-eighties when she and her husband, photographer Ronald Stoops, collaborated with designers such as Martin Margiela and the Antwerp Six (Dries Van Noten, Ann Demeulemeester, Dirk Bikkembergs, Walter Van Beirendonck –W&LT, Dirk Van Saene, Marina Yee) –some of whom she still has the pleasure of working with. She also worked with newer Belgian designers such as, Raf Simons, Véronique Branquinho, Jurgi Persoons and Patrick Van Ommeslaeghe.

Inge finds inspiration through her husband, her cats, trees, music and the arts in general. She is sensitive to her surroundings and studies the behavior of those who surround her. All of these elements are combined and projected in Inge’s work –especially the more personal projects that her and her husband dedicate a lot of their free time to. These works are often exhibited in museums or art galleries and allow for Inge to have a variance of outlets for her artistic drive.

In 1998, she published Make-Up in 500 copies. The book was well-received and distributed in Belgium, Paris, Rotterdam and Tokyo. As a result, a small retrospective on Make-Up appeared in Purple Magazine. Her desire to not limit make-up art to the fashion world alone is also demonstrated through her collaborations with the theatre. Inge lent her skill to a dance theatre play called Rain, directed by the infamous Anna Theresa de Keersmaeker.

Her work has appeared in magazines such as, Vogue (British, Italian and Japanese versions), i-D, Dazed & Confused, Purple, Self-Sevice, Numéro, Another Magazine, V and A Magazine.

Furthermore, Inge’s talent can be seen in the music videos of Bjork (“Pagan Poetry”) and Marilyn Manson (“This is the New Shit!”).

Blonde means beauty with brains. As hair-and make-up artists, we create as many looks as there are desires. We love playing with the aesthetics of past and present times and familiar and unfamiliar cultures. Hereby we use our technical skills , knowlegde of common and foreign history and, above all, good taste.

Severine Nijs & Valerie Verbeeck launched Jackie Lee in 2011. They combine their experience as models on the catwalk and their love for fashion shows with an innovative vision on the fashion industry. An excellent basis for the appealing productions of Jackie Lee!

This joint passion and different background are undoubtedly their major assets. Valerie holds a Master’s degree in Law, Severine learned the ins and outs of the business in Communication & Event Management. A strong duo with a mission!

Photographer Oona Smet joined the team in 2014. She works as a model booker and assists our talents. With her creative background she adds a refreshing touch to all our projects.