Twice a year MoMu presents a new exposition: based on the MoMu collection (25,000 pieces), and completed with loaned works, these expositions might tell a designer’s story or focus on a fashion related theme. You won’t find a permanent display here, but rather a varied programme that focuses on the different dimensions of the world of fashion.

The story supported by scenography
Each exposition tells a complete story. In addition to exhibiting garments, they will also portray the designer’s sources of inspiration, or connections to other art disciplines, etc. The result: an exhibition hall that changes for every exposition and takes you on a journey to a completely different world of fashion; a world just waiting to be discovered.

MoMu+Friends
MoMu strives to reinforce their connection to the larger public through a varied programme of workshops, evening openings, visits and seminars. Their objective is also illustrated by the MoMu’s friend’s association, MoMu+Friends. Since 2011, this network unites people with a passion for fashion. For a contribution starting from €50 you too will have the opportunity to join forces with MoMu and contribute to the international success story of Belgian fashion, on top of which you will be able to enjoy special offers and unique activities.

ModeNatie: from department store to museum
You can find the ModeMuseum at ModeNatie in the Nationalestraat, in the heart of the Antwerp’s fashion district. The building that houses ModeNatie was built in the 19th century as a department store for the New England Menswear and Children’s fashion shop. After a thorough renovation in 2000, led by Marie-José Van Hee, the architect from Ghent, MoMu too opened its doors here in September of 2002. The ModeNatie also houses the Flanders Fashion Institute (FFI), the fashion department of the Royal Academy of Fine Arts – Artesis Hogeschool Antwerp and the Copyright Bookshop.

PERMANENT COLLECTION
The City of Brussels Fashion & Lace Museum has over 10,000 items of clothing, lace and accessories from the 16th century to the present day. It presents its collections in rotation, through annual exhibitions.

The museum’s collections are made up of private donations or purchases.

Strict standards must be maintained in order to conserve textiles. These standards regulate the heat, light and humidity of the rooms in which the outfits are exhibited. Therefore, the collections cannot permanently be on display.

The Fashion & Lace Museum is the only Belgian museum that exhibits Brussels lace. Until the 19th century, this fabric made the Brussels famous across the globe.

In 1977, the city founded a museum in order to showcase lace in its proper context : Museum for Costume and Lace. Since then, the collections have continued to grow. They offer a panorama of western European civil fashion from the 18th century to the present day.

In October 2017, on the occasion of its 40th anniversary, the Museum for Costume and lace became the Fashion & Lace Museum, a new name to strengthen the dialogue between fashion and history.

Since June 2020, the museum has been putting the items from its collections showcased in past exhibitions online. These pieces are added to the inventory of movable heritage of the Brussels-

Fashion in Hasselt
The trade of weaving was already one of the pillars of the city in the year 1313. The textile industry became even more important in 1383 when the cloth weavers moved from Leuven to Hasselt due to political agitation in their hometown. At the time, Hasselt enjoyed great renown as a cloth city, partly because of the vicinity of The Kempen area where large quantities of wool were bought.

The Hasselt cloth was praised for its excellent quality and neat finish. It was sold in Liège, Namur, Antwerp, Amsterdam, Gorkum, Cologne, Frankfurt and Lübeck.

The cloth industry was of great economic and social importance to Hasselt. In the 15th century, one fifth of the population earned its daily bread by working in the cloth industry and in 1536 the city had about two hundred master cloth weavers. Even then, the trade of the “laeckenmeikers”, the master weavers and the weaver boys surpassed all the other trades in number of members and importance.

Hasselt has been a regional trade centre for a long time, but since WW II the fashion and textile business has been flourishing in a way that greatly exceeds the size of the city. Stylish clothes, luxury accessories and other fashion items attracted countless and frequent shoppers from Flanders, the Walloon provinces, the Netherlands and Germany.

The establishment of a fashion museum fits into the picture. On the one hand it can illustrate part of the social and creative history and on the other hand it can inspire people who wish to be active in fashion, today and in the future.

The Fashion Museum started its activities in the end of 1987 and opened its doors to visitors in 1989. After a break of a few years (1993-95) due to radical restoration and design works, the museum became permanently open to the public in its renovated accommodation on the 2nd of September 1995.

The Fashion Museum in Hasselt is situated in a historically valuable complex of buildings. The former convent and hospital of the Grauwzusters, a 17th-century building whose exact date of construction (AD 1664) can be read from the wall anchors in the facade.

This convent has always been a location of outspoken social significance, it has been given several different functions in the course of its history. For three centuries, the hospital played a central role in nursing the town’s sick. Under French rule it was given a new purpose like so many churches and convents. In 1796 the convent community was disbanded, and all clergy was ousted the year after. The premises were then used as a prison and subsequently as a barracks. As early as 1805, however, the old hospital wings were made available to the Committee of Civil Hospices to house a civil hospital, and not until 1818 did nursing again become the nuns’ responsibility.

Serious damage to the buildings during World War II, together with the need for more sophisticated hospital infrastructure necessitated the construction of a new hospital in a different location.

In 1957, a beginning was made with the building of the Virga Jesse Hospital, and in 1968 the last patients left the old hospital. The vacant premises then offered temporary accommodation to the Jenever Museum, the Town Museum, and the Municipal Cultural Office. When in 1988 the Municipal Fashion Museum (Stedelijk Modemuseum Hasselt) was opened, the complex was given its permanent purpose as a museum.

The restoration of the building between 1993 and 1995 has been done by architect Luc Vanroye. The interior, like the glass support structure between the two wings and furniture, has been designed by Vittorio Simoni.

The Museum can provide a guide. A tour takes about an hour and a half and costs € 70 (English – French -German).
One guide for a group of maximum 25 people.

The Museum is fully wheelchair accessible. A wheelchair is also available and may either be booked in advance by telephoning 011 23 96 21 or borrowed on the day by asking a member of staff at the Information Desk.
A Wheelchair-accessible toilet is available on the Ground floor.
A disabled parking space is available in front of the Museum entrance (Gasthuisstraat 11). 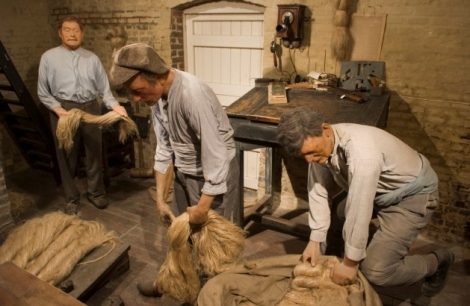 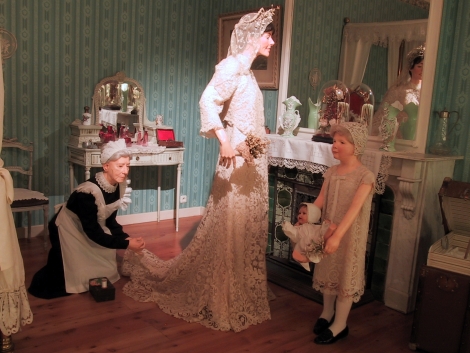 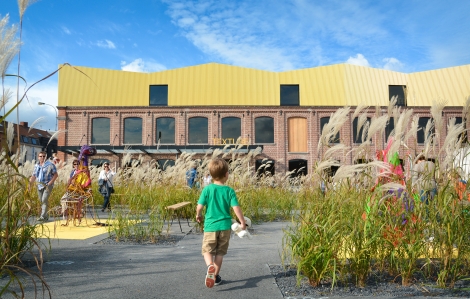