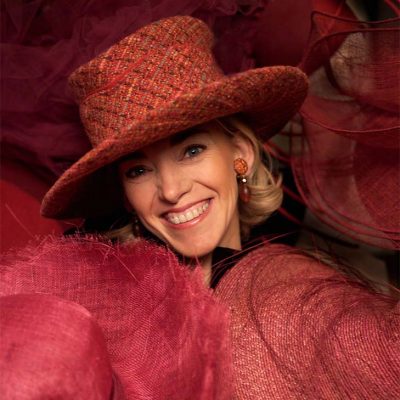 Fabienne Delvigne is a Belgian milliner and has specialized since 1987 in the design and manufacturing of Haute Couture hats, jewellery, headgear, handbags and other fashion accessories. After studying Marketing, she launched her own company and became an iconic designer in Belgian fashion.

The elegant headwear that Fabienne Delvigne has created since the late 80’s has secured the Belgian milliner’s position as the go-to designer for members of the Royal Families of Belgium, The Netherlands, Grand-Duchy of Luxembourg and Sweden.
Her know-how has been rewarded since 2001, when she was initially awarded the official patent of « Belgian Royal Warrant Holder ». Fabienne Delvigne’s sophisticated and timelessly chic millinery has won her wide acclaim and this title was followed by the appointment of Fabienne Delvigne as a member of the Chamber of High Commerce « Brussels Exclusive Labels » in 2004. The same year, Fabienne Delvigne participated in the « 5 femmes de goût » catwalk show and conference at the Royal Evian alongside Chantal Thomass, Pascale Mussart (Hermès) and Anne-Sophie Pic (starred Chef).

In 2013, for the inauguration of H.R.H. King Philippe I, his wife Queen Mathilde wears the « Envolée » hat made of abaca fibre and silk. The trim of this hat symbolizes two wings that the designer imagined to symbolize the takeoff of Belgium under the reign of the new royal couple. Shortly after his nomination, H.R.H. King Philippe, like his father King Albert II had done in 2001, granted Fabienne Delvigne the title of Supplier to the Court of Belgium, perpetuating her position as a provider to the Belgian royal family.
Fabienne Delvigne collaborates with other fashion houses such as Giorgio Armani, Chanel, Dior or Natan. In 2007, she created a hat for the Van Cleef & Arpels catalogue.

Very imaginative, she likes to collaborate with other talents to express her know-how in new and original ways, but always with refinement.

In 2014, for example, she was asked by the Carrières du Hainaut to design their new booth at the Biennale de Courtrai (a design and decoration fair).

She has also made crystal or chocolate hats and, more recently, she collaborated with BMW and created two hats for the launch of the new i8 Roadster.

Reasonably eccentric with a touch of originality, her fashion accessories are aimed to make woman look more beautiful and attractive. Her style is definitely feminine, aerial and innovative.

In 2008, the Studio Collection offering hats for everyday wear was launched, it is also available for gentlemen. Today, these collections can be purchased through her e-shop launched in 2018.

On the occasion of the 30th anniversary of la Maison, Fabienne Delvigne retraces her extraordinary career as a Belgian entrepreneur, hat designer and holder of high luxury craftswoman. Her book “Sublimer par la différence” is prefaced by Stéphane Bern and Diane von Furstenberg.

In the year 2021, the Caring Hat project was born. This line of hats, turbans and caps is designed for people suffering from alopecia (hair loss) as a result of cancer treatment or a serious illness.

Fabienne Delvigne’s hats and accessories are designed and handmade in her designer’s studio in Brussels.

Fabienne Delvigne Portrait Red Hat
The designer regularly holds conferences on the magic of her craft as a designer and on the « Art of Elegance ». These conferences can be held in her workshop where you will be able to discover Fabienne Delvigne’s universe during a privileged visit in an exclusive and unique setting.